Sophie never stopped talking. She even sleep talked. It was as if someone turned her onto talk mode and broke the switch. Actually, there was no switch. No “Off” at all.

Lewis was ten and his parents still wondered when he would start talking. Lewis preferred to listen. He sat behind Sophie in class and listened to her. Her constant chatter never annoyed him. He thought she was funny. Now and then he said something to her such as, “Uh-huh” or “Wow” and when he felt like making a big effort he might even say, “What happened next?” or “Did you really?”

They were both clever kids in their own ways. Fortunately for Lewis, he showed how clever he was in his schoolwork. Unfortunately for Sophie, she was too busy talking, (and being sent to the corner, to the office, and to the Principal) to get much work done.

One Monday afternoon, when it was Lewis’ turn on message delivery duty, and Sophie had spent twenty minutes writing, “I will be quiet in class” over and over on the whiteboard, their teacher sent them both out together to run a couple of errands.

On the way, Sophie told Lewis about the camping trip she’d been on in the weekend. She was up to the part where her dad taught her to make a bivouac when Mr Allington, the teacher for the juniors, ran past. He was wringing his hands and muttering, “Stupid, stupid computer. How can I have lost all that work?”

Sophie stood still, watching him pass. “Mr Allington will be gone for a while. Let’s teach his class some camping lessons.” She grabbed Lewis by the arm and dragged him off to the juniors’ classroom. Lewis looked on in amazement as she waltzed into the room and launched straight into teacher mode.

“Right children, pens down! You boys! Stop chasing each other! Mr Allington has asked me and Lewis to take you on a mini expedition. What we need are the painting mats, string, scissors and the hockey sticks.”

At this point, Lewis made his first serious mistake at school. He thought, “Why not? This could be fun.” With the help of Jackson, the junior class leader for the day, he found the stuff, put it in a big plastic box and gave it to two kids to carry. After all, he was the senior—he shouldn’t need to do any heavy work himself! 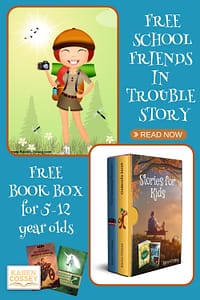 The juniors were in two lines and Sophie was telling them they were going on a survival trip by train. The children needed to help be the train and follow her. Lewis was to bring up the rear. They chugged out of the door, turned to the right, avoiding any other classrooms, and headed straight for the trees at the edge of the sports field. Lewis started making train noises too, getting into the swing of it.

When they reached the trees, Sophie got the children to sit in a semi-circle and began telling them how to survive in the bush. Lewis didn’t think you needed to worry about lions that might have escaped from the zoo when you were lost in the bush. There wasn’t even a zoo in their town, but he could tell her story about being torn to shreds made a huge impact on the five-year-olds. He sat by Marie, who’d only started school that week. She looked close to tears. He held her hand and said, “Don’t worry, you’re safe.” He gave Sophie a look which meant, “No more lions—RIGHT NOW.” She stopped mid-sentence as the lion was ready to tear some poor child’s arm off, and told the children, “I’m only kidding. There’re no lions in the bush.” All the children except a few boys let out an enormous sigh of relief.

“What you do need to know if you’re lost in the bush, is how to build a bivouac. Let me explain while Lewis demonstrates”. Lewis stood up. So did Marie. She wouldn’t leave his side and kept looking around for lions.

Lewis, always good at following instructions, easily attached the string to the corners of the paint mats, then tied one end of the mat between two trees. The tricky part to building the bivouac was pushing the hockey sticks into the ground. A few knocks with a nearby rock did the trick. Lewis hoped no-one would notice the dents made in the hockey sticks.

Soon he had finished Sophie’s bivouac. It looked more like a hut to Lewis than a true bivouac, but he was not going to say anything. The five-year-olds seemed impressed—they all wanted a turn inside. Even Marie left his side long enough to crawl in and crawl out.

One clever kid asked whether you would really have string, a pair of scissors, a painting mat and hockey sticks in the bush. Sophie told him to go climb a tree. Which he did.

Meanwhile, Mr Allington had returned to his class, and finding it empty, had his second panic attack for the day. Being a strict teacher, he always expected his students to do exactly as he said, and he’d told them to finish their writing work. He had never experienced a mass exodus, and it made him feel sick in the stomach.

Mrs Brightwell, never having experienced Lewis being late back from giving a message, had stepped out of her classroom to check on him and Sophie. She bumped straight into a wild-eyed Mr Allington.

“Hmm, That’s a bigger problem than mine. Shall I help you search for them?” Mrs Brightwell asked, and they split up to go find them.

So it was that they both approached the survival class from different angles of the sports field. Mrs Brightwell got there first but as the trees hid her approach, she could watch and listen to Sophie explaining the need for coca cola, a bread maker and a hairdryer when you go camping in the bush.

At this point, Lewis had had enough of Sophie’s interesting ideas. He decided she didn’t know what she was talking about, so he did something he’d never done. He spoke up. To Mrs Brightwell’s, and Sophie’s utter amazement, he gave the children a clear and concise, point-by-point correction of everything Sophie had said.

He was summing up what you should eat and drink in the bush when in roared Mr Allington. He would have yelled at them all, but Mrs Brightwell stepped out from behind the tree and took charge. Within minutes the juniors were back in their classroom (with no idea that anything was wrong), while Lewis and Sophie were in the Principal’s office. It was the first time Lewis had ever been told off. For Sophie it was all too familiar.

Later that day, once Mr Allington had calmed down, Mrs Brightwell spoke with him. “Wasn’t that great? I think we’ve discovered two excellent student helpers for your classroom.”

The mere thought of it gave Mr Allington his third panic attack for the day.

Thank you for reading my online story—I hope you enjoyed it. Find more stories like this in my FREE  ‘Stories for Kids’ digital Book Box which includes two children’s books for 5-12 year-olds. This is my free gift to you when you join my monthly newsletter. I’ll email you just once a month with my book news—you can unsubscribe at any time and I will keep your details private—I hate spam as much as you do!