My blood froze at the sight of a gigantic river dragon thrashing about in the castle’s moat. My sister was in the castle and that red snake-like dragon would find its way inside any minute. The stripes all over its body pulsed as it twisted first one way, then another, getting closer and closer to the top of the tower where it could gain entry from the stairwell. Terrified screaming came from inside. Fear had me in its grip as I sat motionless on the back of a unicorn.
It had been a normal morning—Charity the cook, who should have been called Grumpsnot, had thrown me out after I’d spilled the oatmeal all over the floor—and I’d been singing as I’d walked through the pixie forest to visit my sister. I remember that I was singing, and the sun was shining, and the most exciting thing I was thinking about was the fresh bread Liliana would give me when I reached her.
That’s when I’d spotted a cloak on the ground. It was so soft and luxurious I couldn’t resist trying it on. Stupid me. As soon as the clasp clicked shut, a white unicorn had stepped out from behind a tree and spoken to me! She’d actually spoken words! I was still recovering from the shock of hearing a talking unicorn when she’d told me the cloak was now mine. As was the job of protecting the kingdom.
Next, she’d said there was a commotion at the castle and insisted I hop on her back. Not likely! But she had some kind of magical stare and before I knew it, I was on her back, racing to the castle. And now the only thing keeping me sitting there was the thought of Liliana, my sister, trapped in the castle. That dragon would crunch through her in one bite.
“Off you go then,” the unicorn said, nodding her head towards the monstrous creature.
“Wha . . . wha . . . what?” I stammered.
“Reach inside the cloak. There is a pocket, and inside the pocket is the dragon dagger. It’s magic—it kills all forms of dragons instantly. Once you stab him with it, he’ll just . . . poof . . . dissolve away.”
“Once I do what?” I forced the panic out of my voice.
“Once you stab him,” she said.
“I can’t do that. He’ll eat me before I get close.” I wanted to shout, but I was so scared of the river dragon, I only managed a hiss.
“Pull the hood of the cloak over your head and you’ll be invisible. But be very quiet—he can still hear you. Do it now. He’s almost at the tower. He’ll be able to squeeze through the doorway to the stairs.”
Some kind of power emanated from the unicorn and I stopped trembling as I felt a surge of strength and bravery rise up inside me. I tried to fight it off with the last dregs of common sense I possessed, but the strange feeling overwhelmed my terror.
My hand betrayed me by reaching up and pulling on the hood, and I vanished! I couldn’t see my hands or feet or any other part of myself, nor could I see the cloak. For a brief moment, I forgot the river dragon as I waved my arms around, trying to find myself. How could this be?
The roar of the river dragon dragged my attention back and that invading sense of courage, which had somehow found its way to my invisible head, yanked me into action.
I slid off the unicorn’s back and ran towards the moat. The river dragon was stretching up from the other side, about to push his way through the doorway on top of the tower. He was even more terrifying up close, with fiery eyes, dripping fangs, and an overpowering stench. His skin was made of knife-edged scales. Would I have the strength to push the dagger through them? He was on the opposite side of the moat—how was I to reach him?
As I ran closer, my foot caught on the bottom of the cloak and the clasp came undone! I yelped as the cloak fell off me. I could see my hands reach for the ground as I fell over.
I jumped up as the river dragon whirled around, roared, then snaked across the water towards me. Clutching the dagger with two hands above my head, I shut my eyes. His mouth was coming towards me—I knew because I was getting covered in his saliva. Pure fear raced through me. I was about to become his snack. What good could the small blade I held overhead do against the ravenous mouth descending upon me?
But the knife was the only hope I had, so I jabbed it upwards and felt it connect with the soft tissue inside the dragon’s mouth. A force like a hurricane knocked me off my feet as the river dragon gave a loud, piercing scream . . . and dissolved into nothing. Nothing except repulsive, sticky, smelly ooze, which engulfed me.
The unicorn was right there beside me. She smiled as she spoke. “Well, at least you didn’t get any dragon muck on the cloak.”
Would she disappear if I stabbed her with the dagger?
“Pick up the cloak and climb onto my back. It’s best to keep you a secret for a while yet. Let’s get out of here before someone recognizes you.” 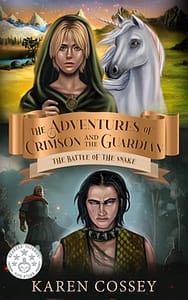 I could hear cheers and shouts coming from the castle, so I did as the unicorn suggested and we galloped back into the forest, where she found me a stream to wash off the dragon muck. When I was clean and calm again, she told me to visit my sister Liliana, but not to mention anything about the river dragon.
When I reached Liliana, she was full of news about the river dragon’s defeat, saying some people thought they’d seen a child—and even a unicorn!
“Sounds astonishing!” I said with meaning, almost not believing it had happened. Sitting in the kitchen, eating warm bread, it all seemed like a crazy nightmare.
I took another path through Poemdash Pocketwoods on the way back, but the unicorn found me, just as she said she would. She gave me a kind smile, but this made my urge to run away even stronger.
“Don’t run, child,” she said in a soothing tone. “Put the cloak back on. It’s like it’s made for you.”
I draped it over my shoulders and clicked the clasp shut. It felt so warm and safe.
“You were very brave today,” she said. “I can tell you are ready for adventures. Sorry for throwing you in the deep end like that, but someone had to do something. It was a bit of a calamity, don’t you think?”
Was she joking? A bit of a calamity? That river dragon had almost eaten me! I pushed down my impulse to rant and rave at her, but only because I wanted to hear if she had anything else to say about my being ready for adventure. I still believed she might just disappear any second like some strange dream, and if she had something to say first, I wanted to hear it.
“I think you’re ready to give up working in the kitchens and come along with me,” she said.
The kitchens with the horrible cook and no horses. I sighed. When Master Ashton had taken me in after father died, I’d begged him to let me work in the stables. I’d always helped with father’s horses. But Master Ashton had said the stables were no place for girls to work and had left me under the care of Grumpsnot the cook. Now a unicorn was offering to take me away. Was I dreaming?
“I’ll teach you everything you need to know about the cloak,” she said. “If you join me, you’ll have the adventures you’ve always dreamed about.”
“I’m not brave enough for adventures,” I said. “I was terrified today. It was you and your magic that made me do it. Who are you anyway?”
“I’m Crimson,” she said. “I watch over Sir Ivor.”
I recognized the name. Sir Ivor was a national hero. People called him ‘a short man of tall deeds’. He’d slain dragons, scared all the witches from the kingdom, and defeated the giant trolls single-handedly. Was the cloak his?
“Where is he? I can give him the cloak back. He’s the one who should be killing river dragons, not me.” I yanked at the clasp, trying to open it.
It stayed shut, like the mouth of a young child refusing to eat his vegetables.
“He’s not coming back,” Crimson said. “He left the cloak for me to give to his successor. That’s you. And you’re wrong about not being brave enough. True courage comes from acting even when you are scared. You are brave. You just don’t believe it. That courage you felt came from within you. I can’t put courage inside someone, I can only uncover it.”
She looked at me, and I knew it was my chance to say no. But I knew I wanted to stay with her and see what the adventures would be. I’d survived the river dragon—surely there couldn’t be worse things than that? And anything had to be better than working in Master Ashton’s kitchen.
“I’d need to tell Master Ashton I’m leaving,” I said.
“We’ll do that now. Don’t worry. I know your master, and he’ll be happy to leave you in my care once I talk with him.”
She knew Master Ashton? How could that be? He was a simple, good man. What did he know of unicorns?
“I knew his parents, if you’re wondering,” Crimson said.
Had she read my mind?
It wasn’t important how she knew Master Ashton. I needed to decide if I would return to his care or stay with Crimson. Grumpsnot the cook, or the talking unicorn.
“Where are we going first?” I asked.

Follow Kinsey on here adventures:  Get a copy of this book here.

You can also find a Book Report Template to use with it in your homeschool or classroom here. 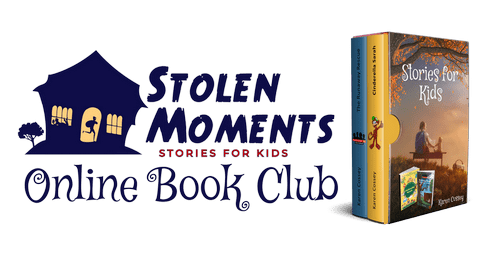 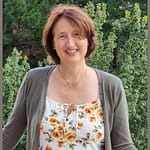