I don’t like Tuesdays. Tuesday is the day the prince visits. He always comes to see Lady Roselle, because she is so beautiful. That has to be the only reason, because she’s a nasty snake, with pumpkin breath too. That’s what I call her, but my sister Sarah scolds me and says she’s been good to us, and we must be respectful.

Anyhow, when the prince visits, even I have to take a bath, and I am only the kitchen lad. Cook threatens she’ll put me in the sink with the dirty dishes if I don’t get down to the river and wash my hair. Ain’t gonna risk having any soap on my skin, no Siree! So off I run. That’s not so bad I guess, I love jumping off the high cliff, except the water is freezing. A few months ago, I was having so much fun jumping and splashing, that I didn’t realise the prince was watching me. He called out to me and chatted with me for a good long time.

What a nice man he was asking me about myself and my sister. Well, I told him the whole story, with all my best acting. Sarah says I am a great actor, and he was a great audience. I walked tall and proud like my Dad, the great merchant that he was, and I blew strong and fierce like the storm that sank his ship. I died grandly praying for my two precious children. Then I pretended to be my wicked stepmother, who threw us out of our own home and made us come to work for Lady Roselle. I was getting carried away with myself because this is my favorite story to act out; my sister does love it and laughs at my fooling around. But I kept my wits about me and avoided the scene where I act out Lady Roselle as a snake. Thankfully, someone came to call the prince away just then. He seemed sad to say goodbye, but probably he was sad to have to go talk to that Lady Roselle.

That was the only good Tuesday I’ve had since then. Lady Roselle heard about my acting somehow, and now I’m banned from appearing before the prince. Instead, my sister has to wait on Lady Roselle and his Royalness, hand and foot. She’s kind of nervous around the prince, and she hates all that standing around, not moving, and saying ‘yes Ma’am’, ‘no Ma’am’. She’s a little clumsy too and keeps dropping things. I told her that if she was a slave in some countries, she could be killed for dropping things. That didn’t seem to help her.

Lady Roselle enjoys punishing her later once the prince has gone. “Clean this, fetch that, fix this, and try not to drop it, Sarah,” she says in her hoity-toity voice.

I really have trouble being respectful to that snake. It’s worse because Sarah used to go to school with Roselle when they were children, and Roselle so loves to make a big thing of Sarah being her servant now. When I complain, Sarah tells me to shush, we have nowhere else to go, so let’s make the best of it.

The other Tuesday I was helping Jim the gardener, when who should appear but the prince himself, with my sister! I couldn’t believe it! Seems Lady Roselle sent Sarah on an errand to fetch some vegetables from the garden, and the prince offered to go with her because he had a headache and needed some fresh air. Magic, I reckon. They were talking and laughing like old friends. I’ve never seen Sarah looking so relaxed and pretty; not that I’d tell her so.

When the prince saw me, he seemed super excited and asked me to act out a story. I did my other favorite, Puss in Boots, with the help of Jim as the Miller’s son, and Sarah as the beautiful princess. The prince offered to be the ogre and what fun we had! He said I was the smartest puss, and Sarah the most beautiful princess he’d ever seen. Boy, did she blush, especially when I told the prince he was the ugliest ogre I’d ever met.

This last Tuesday, the prince invited Lady Roselle to his ball. He said all young ladies of the land could come, even Sarah if she wanted. He thought it would be nice for her to have a change. Wow, did Lady Roselle have a fit about Sarah going to the ball. She made her life miserable for the whole week and forced her to write a note declining the prince’s invitation.

Yesterday was Tuesday again; the day of the ball. And Sarah couldn’t go. She was heartbroken—she never cries, but I caught her all red-eyed and snotty-nosed because she so wanted to go. She hasn’t been to a ball since our father took her as a girl. I tried to cheer her up by telling her there was no point worrying about it—she couldn’t go now anyway because she had no dress and her face looked like a horse had stomped all over it. That didn’t help much, though she hit me with her pillow, and we had a glorious pillow fight which seemed to make her happier.

Her face was almost back to normal when there was a knock on the door, and who was there but this grand lady all dressed in finery. Magic again. But no, she said she wasn’t magic, and she said she wasn’t a fairy godmother either. She was much too busy for that. Wow, she was impressive; I liked her immediately, and can’t wait to act her out. I called her Captain because she took charge, just like my father used to do. She had two maids who were carrying the most beautiful gown I’d ever seen, as beautiful as anything the snake wears. She dressed Sarah in it!

Sarah looked gorgeous. The captain, who turned out to be the queen’s personal dresser, muttered to herself that Sarah looked just like her mother. We were so amazed that she knew our mother that we refused to do anything else until she told us more.

It seems our mother, who died soon after I was born, was a close friend of the queen. Also, the king knew Father and was upset when he heard what had happened to us. He believed our stepmother was still looking after us, but the prince had talked to him about my drama scene and the king himself had worked out who we were. He wanted to meet us tonight at the ball to check we were who he thought. So, the queen had insisted on the captain bringing a suitable gown for Sarah to wear, and unfortunately, a suit for me to wear.

The last part was all a whir, I had no chance to protest about the horrible clothes I had to put on, as time was ticking according to the captain, and before I knew it we were in a carriage and on the way to the castle. I thought Sarah was going to cry again, so I punched her in the arm and said, “There’s nothing you can do about it, so make the best of it. It wouldn’t be the best if you get that lovely dress dirty with your snotty tears.” I saw the captain smile to herself, but she didn’t see my sister punch me hard on the arm. I’ll have bruises for weeks! Anyhow, Sarah laughed after that and said, “No matter what happens when Lady Roselle sees me, let’s enjoy tonight!” All right for her, she didn’t have a dead arm.

We arrived and what a grand palace it was. It amazed me. I wanted to run around and touch everything, but I stayed close to Sarah. Who should come up straight away to us but the prince himself and said his father would see us soon. Then he whisked Sarah away for a dance, leaving me with his cousin who is the same age as me. He’s a decent boy—he took me on a tour and told me lots of funny stories. He’s a good actor too, so I hope we can get together and make up some plays.

The cousin and I spied on Lady Roselle, who was giving Sarah the evillest look ever. Sarah and the prince made quite a pair I guess; they were smiling and laughing and having a wonderful time. Snake didn’t like it at all.

After a few dances, the king asked to meet us. He looked at us both and said, “No doubt, you are your mother’s daughter, and you, young lad, look just like your father.”

I felt so proud. My father was the best.

The king wanted me to show him the play about my father. He loved it.

Now it is Wednesday morning—after the ball I slept in a bedroom in the palace! I’ve never jumped on a bed so soft! Sarah has come in after being up all night and whispered to me that the prince has asked her to marry him! I can’t believe it. She will have to kiss him! How awful. I feel sorry for her, but she promised that I would live with her here. After a palace breakfast I think I’ll feel very happy for her and her new life. I could even grow to like Tuesdays in a place like this..

Thank you for reading my online story—I hope you enjoyed it. Find more stories like this in my FREE  'Stories for Kids' digital Book Box which includes two children's books for 5-12 year-olds. This is my free gift to you when you join my monthly newsletter. I'll email you just once a month with my book news—you can unsubscribe at any time and I will keep your details private—I hate spam as much as you do!

Free Book Report Templates available to use with this book.

When Logan trespasses onto private property he never expected he’d make friends with a wealthy and mysterious family.  Neither did he expect to be captured by shipwreck pirates.  Now he must fight for his life and the lives of his family and new friends.

Free Book Report Templates available to use with this book. 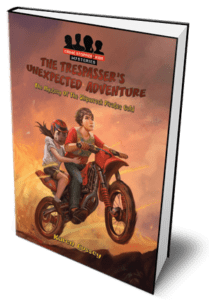