Monday
Being Alex’s bodyguard is an enormous responsibility. He’s only five, so he needs a lot of watching over. You see, Alex’s Mom, Natalie, has a most unusual job. A most dark and dangerous job. She’s a solo Mom which makes it even more amazing that she can handle the job, look after Alex, and remember to buy me my dog treats.
Okay, I’m sure you want to know what her job is. Hold on to your hat—she’s a coach for the school’s junior netball team. Now, you might laugh, but around here, it’s no laughing matter. Every week, Natalie receives threats from parents desperate to have their little ray of sunshine picked for player of the day—it means fame, fortune, and free meals at fancy restaurants like McDonalds.
When Alex started school, I volunteered to be his bodyguard, because an attempt to kidnap him had been made before. On his fifth birthday, a strange man ran up behind him as he was crossing the road, picked him up and ran off with him! Thankfully, Natalie caught him, and all was well. A car screeched to a stop, and a pale looking, shaking lady hopped out—she’d seen it all. The problem is, Natalie doesn’t get it like I do. She ended up thanking the guy for saving Alex! She should have had him sent straight to prison! Saving Alex. Huh! That Guy is up to no good.
Every day I walk Alex to school and sit outside his classroom. At lunch time I play it cool. No one knows I’m an undercover bodyguard dog. I make sure I join in all the ball games and test any food scraps for poison; tough job as it is. Someone’s got to do it.
Anyhow, school has been safe now for ages—it’s the home scene that’s getting scary. That Guy has been hanging around during the day—I can smell his aftershave. He must get in when Alex’s at school. Maybe he’s stealing things. Strange thing is though, his smell is only ever in the kitchen on days when Natalie’s come home for lunch.
Well, now I will have to split my time between school and home. I need to see what That Guy is up to. Natalie’s coming home for lunch tomorrow. Sure hope Alex’ll be alright without me to fetch the ball for him and the boys.

Tuesday
I walked Alex to school, told him I would be back later, then headed home. Bright kid, he seemed to understand. Most kids these days only know two languages, human and computer. But Alex, now he’s truly multi-lingual. He’s got dog and cat mastered. I must protect that kid at all costs…
Anyhow, I went home and checked it out, all locked up tight and secure. No one’s getting in here, especially with me sitting out the front.
Well, that’s what I thought; but then the strangest thing happened. Natalie turned up at lunchtime, humming. She never used to hum—she’s always worn out from her dark and dangerous job. Now she hums. You can imagine, I was worried. Five minutes later, I was shocked. Who should I see walking up the path; it was, you guessed it, That Guy. He was humming too. Natalie greeted him with a kiss on the cheek! I couldn’t believe it! Then they sat and chatted and laughed while they ate lunch. And no dog biscuits came my way. I note that simply as a detail, bodyguards are sticklers for details. It’s nothing to do with me being put out. No, not at all. 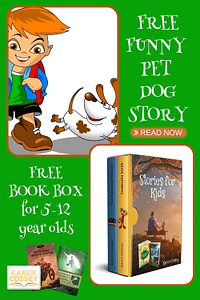 Anyhow, when he stood to leave, I growled, and barked, and Natalie finally noticed that I was there and not at school. How can she spot the best netball players if she doesn’t even see me sitting there right in front of her for an hour? She must be sick. That Guy has to be poisoning her. Once he left, I tipped out the rubbish bin and sniffed the lunch scraps for any telltale poison smells. Being a brave and noble dog, I also did a taste test on a few items, until Natalie yelled at me and kicked me out. She’s forgotten my role in protecting her boy—it must be That Guy making her brain a bit vacant. Never mind; I’m loyal. I’ll stick by until this whole nasty Guy Thing is resolved, no matter how he turns my family against me. Sniff, I have got to go now.

Wednesday
That Guy was back again today. I must say, perhaps I was wrong about him. He came with a pocketful of the best dog treats, usually only reserved for Christmas. And he knows how to give a good all over body scratch. Hardened kidnappers wouldn’t care about those kinds of things. They kick dogs and only feed their victims cold, mouldy leftovers. That’s been my experience, anyhow.

Thursday
I have observed that Natalie’s a lot happier when That Guy visits. Today he was there after school—this time with a girl who he claims is his daughter. I watched him closely. No signs of kidnapping—not yet, anyway. In fact, he kicked the ball around with me, Alex and the girl just like he belonged there. And he brought more dog treats—a small detail worth noting.

Friday
That’s it—it’s resolved. He’s not a kidnapper. The truth is, he’s a coach for the school’s junior soccer team. Obviously, he’s linked up with Natalie so they can both protect each other from those crazed parents who want to kidnap their kids. No wonder really; of course he would choose our family. I am, after all, the best kid bodyguard around for miles.
Guess that’s why there’s all this talk about him and Natalie getting married. How can I look after their kids unless they’re both in the same house with me, so I can keep an eye on the two of them? Plus, when I’m not busy looking after the kids, I’ll have to check up on the big bag of dog treats That Guy left in the garage.

Thank you for reading my online story—I hope you enjoyed it. Find more stories like this in my FREE  ‘Stories for Kids’ digital Book Box which includes two children’s books for 5-12 year-olds. This is my free gift to you when you join my monthly newsletter. I’ll email you just once a month with my book news—you can unsubscribe at any time and I will keep your details private—I hate spam as much as you do!