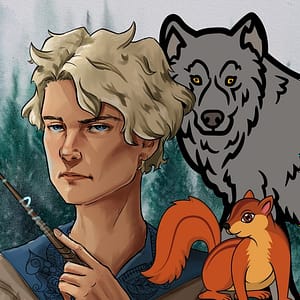 Crimson sniffed the air. “There’s wolves nearby,” she said.

Notching an arrow, I leapt in front of Crimson.  Jola’s wings unfurled and she hovered in the air, clutching a dagger. Fierce squawked and wrapped his talons around her neck, shivering. Strange little dragon—but so cute! Perhaps the wolves would be cute too? My toes bit into the dirt. 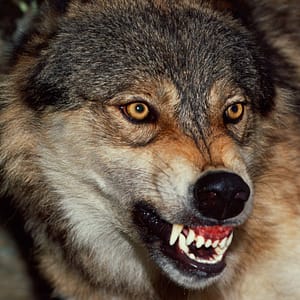 Three large grey wolves slunk out of the trees.  They stopped and growled at us, the largest in front.

Not so cute. My finger rubbed along the top of my arrow.

“Something’s not right with them,” Crimson said.

Savageness flickered in the leader’s glazed eyes.  It wanted to rip us to pieces—why was it waiting? I could let me arrow fly and perhaps notch a second one in time. But I couldn’t shoot three wolves from this close. My heart lurched into my throat.

Without warning a bear tore out of the woods—with a squirrel clinging to its head! It barrelled into the lead wolf, knocked it over and clawed at its neck, ripping its throat open. Blood from the convulsing wolf spurted in the bear’s face and onto the squirrel.  If I kept watching I’d probably throw up.

The other two wolves scrambled away, then circled back again, the same blank stare in their eyes. The queasiness in my stomach tightened into a knot.

“A little help here, Kinsey,” the squirrel shouted as the bear turned towards the now stalking wolves.

Really? A talking squirrel! My fingers froze on my bow.

Crimson nipped me. Yow—the sting snatched my focus onto my arm—and to my bow.

One of the wolves lunged at the bear and I let my arrow fly, grabbed another and sent it into the last wolf. Then I let loose another couple.

I reached for one more arrow. Crimson said, “You got them, they’re dying. Stop.”

Breathing deeply, I pulled her mane, hard. “Don’t you ever bite me again,”

“Ouch.” She nuzzled my shoulder. “You’d turned to stone,” she said.

“That’s a talking squirrel!” I cried, waving my sore arm at the bear who was sniffing one of the dead wolves. The squirrel was perched on the bear’s back now, its tail quivering as it wiped away the blood on its tiny face.  “A talking squirrel!”

“I’m more worried about the bear,” Jola said, landing on the grass beside me. “The squirrel must be a shapeshifting talywren.” 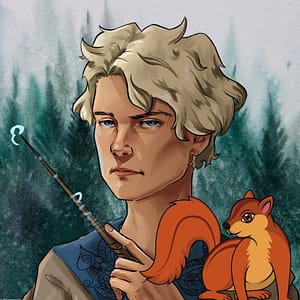 The squirrel bounced off the bear and its shape changed from a squirrel into a talywren, It was StoneIce, small and childlike-looking, but probably as bossy as ever.

StoneIce! I smiled broadly at him. I hadn’t met him since he’d given me my pendant after I’d killed the Dragon of Death. The talywren were meant to keep the pendant safe until the new Guardian of the Land claimed it.  But the dragon had stolen it from them and StoneIce had forced me to retrieve it. I hadn’t known I was the Guardian of the Land, but once I managed to kill the dragon, StoneIce told me I definitely was the new guardian and insisted I take the pendant.  The talywren lived up north of the kingdom, near the Fairy Forest. He was a long way from home.

I’d never seen him shapeshift. Mind you, it happened so fast, it would be easy to miss.

“Oh, it’s you,” Jola said. So, they knew each other. Made sense, they were neighbours.

StoneIce rubbed Fierce’s stomach who made a sort of purring sound. “Glad to see you too, Jola, I could do with your help. With all your help, actually. Did none of you hear the music that controlled those wolves?”

Fierce yapped and jumped from one foot to the other, almost tumbling off Jola’s shoulder.

“Looks like Fierce did,” Jola said. “It must have come from the minstrel’s flute. A couple of days ago I saw him playing it to control the troll, but there was no sound coming out. No sound I could hear, anyway.”

“But the wolves must have heard it,” Crimson said. “He must be nearby.”

“He ran off when he saw Arthur,” StoneIce said and nodded at the bear.

“That’s why the wolves didn’t attack…” I said.

“They must have been waiting for his attack order but it never came!” Jola interrupted me then slapped my back, grinning. I smiled too.  Maybe we could be friends. Sparkle pixie dust, that would be perfect. Finally, a girl who didn’t mind adventures.

“Where did he get the flute, StoneIce?” Crimson said. “Don’t tell me it was stolen. Like the Pendant of Peace.”

My pendant warmed as StoneIce’s face reddened. “Erm, yes Crimson, he did steal it from us. I’m sorry.”

Crimson’s nostrils flared. “He’s a human, not a dragon, StoneIce. You were given these gifts to protect them, not to keep letting them be stolen!”

“I know, Crimson. I’ve only been a few days behind him. I did just save your life—maybe in your thankfulness you could overlook our shortcomings and help us retrieve the flute?”  He tilted his head and opened his sky-blue eyes wide.  He looked almost as cute as Fierce. 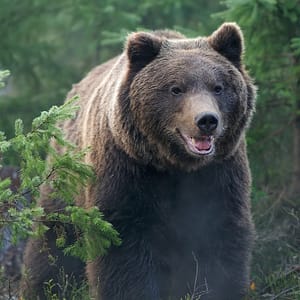 The bear looked up and rumbled.

“No need to talk to me like that, Arthur,” Crimson said.

“You understand the bear?” I asked.

Crimson snorted. “Of course. I’ve known him a long time. You’ll understand him one day too. But not now.  Now we have to get the flute back and deal with the troll. Then have a serious discussion with the talywren about their methods of keeping precious things safe.”

Jola winked at me before facing StoneIce. “Er, StoneIce…I’ve been following this minstrel for a few days. He’s looking for something.  What else do you know about him?”

“So, that’s where you’ve been, Jola. Everyone’s worrying about you,” StoneIce said.

Jola folded her arms. “Well, they shouldn’t have tried to banish Fierce.”

“That’s what I said when they asked me to look for you. Told them you can look after yourself. I said Fierce belonged with you, even if he did eat the Queen’s favourite chicken. It’s not like it laid golden eggs. They should let you keep him.”

Fierce hooted. Was that a smile on his snout?

Jola’s face relaxed. “Thank you StoneIce,” she said. “I just needed to clear my head for a few days, away from the queen. I was about to turn back home but then I saw the minstrel talking to himself. He was excited about finding something valuable, so I started following him until he arrived at his camp where the troll was sleeping.  It was restless, like it was waking up. He played his flute, and even though I couldn’t hear a note, the troll went back to sleep. Then the minstrel left but I guarded the troll. Last night Fierce and I hunted and when we got back this morning, the troll was attacking Crimson and Kinsey. He didn’t have a chance against Kinsey though. She’s a Guardian, you know.”

That troll had had lots of chances to kill both me and Crimson. Still, I stood a little taller.

StoneIce raised his eyebrows. “Really? A Guardian? Imagine that. And so young.”

“Funny, StoneIce,” I said, shaking my head at his fake surprise. “What do you know about the minstrel?”

“Arthur and I have been searching him for three or four days. Late last night I was storing some acorns…” He looked around and sniffed the air, then pointed.”…over there, when he and someone else rode right up and stopped under my tree. They were coming from the direction of Milonderland Castle. And they had a map,” StoneIce said.

“Basil, the shoemaker,” I said. “I saw him take the map from Milonderland Castle. Crimson and I were following him. We didn’t trust him.”

“Good judgement. They’re treasure hunting and I have a fair idea of what they’re looking for,” StoneIce said.

“I think it’s the fairy queen’s crown. Thieves stole it years ago,” Jola said to me.

StoneIce nodded.  “I’m certain they’re looking for it. The thieves hid it somewhere in the kingdom. From what they were saying when they studied the map, it’s in the Jogotchy Forest.”

“We need to catch up with Basil and the minstrel now. And deal with the troll,” Crimson said. “Jola, can you please take us to their camp.”

“We should check the camp first, seeing as they ran off in such a hurry. They might have left something important behind.” Jola said.

A. Check out the campsite

B. Ride straight to the Jogotchy Forest.

After you have voted you can enter the draw to win your choice of one of Karen Cossey’s paperback books.

Book Recommendation: The Lost Books: The Scroll of Kings

I totally enjoyed this book, even though at first the main character, Alex had me worried that I wouldn’t like him.  He was arrogant and snarky, but his confidence and determination won me over. He knows he is meant to be a librarian, and its his job to protect the books. What’s not to love about that? The young queen, Kennerat, gives him a month to sort out the library, and that proves to be a daunting task, especially when the books come to life and start attacking Alex. The mystery of why the books are coming alive is captivating, the plot is brisk and well-planned, and the characters are interesting and well-suited to each other and to figuring out whats’s going on.

Find this book here.
(Please Note: This is an affiliate link. If you choose to purchase this book I may receive a small commission-which goes to my hot chocolate fund to help my fingers tap faster on the keyboard. Even though I receive a tiny commission, that’s not why I’m recommending this book. I actually read it and loved it! )

Here’s something different for the featured pet – a fun quiz about what type of pet you have. At the end you can see the results-—how many people have what kind of pets. Don’t worry, if you think no-one has a pet like yours, you can enter in the type if pet you own. Plus you can also upload a photo of your favorite pet to feature in the newsletter!

Not  a Member of the Stolen Moments Book Club?